Since I’m going to be studying in Brazil from January onwards, I’ve starteding teach myself Portuguese. Portuguese sounds like a bit like Spanish after a car crash, the words sound familiar, but malformed and I must admit that this is part of the appeal of the language. In the same way that one day I want to learn Dutch, since it reads like a German dyslexic having a really bad day.

I like the way that Portuguese sounds weirder than Spanish, primarily because I think I’m still scarred from learning French (and hence romance languages) in school. Getting bad grades when your aunt is a French teacher…and is French…is really not the best idea. Ever since then I’ve avoided romance languages. The problem in school is that there was such an absence of grammar that it was near impossible to learn anything. We learned scripts, like actors, rather than learning how the language itself is expressed and synthesised. For someone who has a more scientific and analytical mind, the lack of grammar frustrated me. Without knowing the rules, how can one be expected to play the game?

This love of rules is what ended up making German a perfect language for me. German is often seen as a difficult languages due to its copious amount of rules and order (much like the German society and people…), but where many people see this as a complexity, I found this to be a great help since it allowed me to process the language. Everything had a clear rule as to why, what, where, when.

Of course though, like all learners, I’ve made some pretty horrendous mistakes along the way to becoming conversational in German. One of the best of these was declaring myself to be a socialist (rather than a social person) to my friend’s parents. Needless to say, they were rather confused at the apparently raging Bolshevik from Scotland that their daughter had brought over.

Better than this was when I did an Arabic course in Singapore. I arrived in Singapore wanting to learn some Chinese, since I was going to be living in Asia. However, after arriving I found Chinese far too ugly a language to want to pursue, so choose an Arabic course instead. During a practice session I said to someone “anta jamal” instead of “anta jamaal”. So instead of calling them handsome/beautiful I said “You are a camel”. Somehow I doubt most Arabians would treat as the intended compliment that it was. I’ve found Arabic to be a really fun language to have dipped my toe into. After making small talk with a guy on the street in Marrakech in Arabic, he kindly informed me that it was good that I’d started to learn Arabic, since I’d be able to talk to God (Allah) when I reached heaven. Later, another Moroccan in the street came up to me out of the blue and said simply “It’s OK, gingers do have souls!” Finding out that I’m going to heaven AND that I have a soul, Marrakech was a great trip!

However, it is comforting to know that I’m not the only makes such mistakes…

In any case, I’m looking forward to making all the mistakes that come with learning a language when I go to Brazil. Already learning German has already helped me in so many wonderful ways; like being able to communicate with my girlfriend’s parents when I go to Germany, to my girlfriend and I being able to make disparaging comments about people in public and being able to read books about a communist kangaroo, who lives in Berlin ( I highly recommend Die Känguru Chroniken if you can read German). I can only hope that learning Portuguese have such a lasting effect on my life as German has. 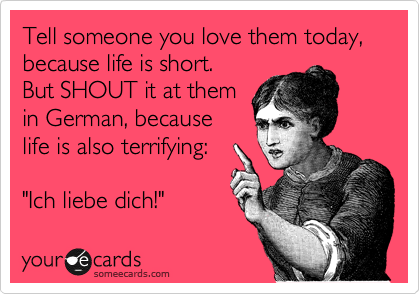 I Leave For Germany